At approximately 9:30 p.m. on Thursday night Fire Department personnel from the Marine Division were approached by a man who stated that someone had fallen in the water off the end of Custom House Wharf. 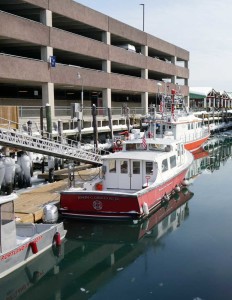 Deputy Chief Robert Thompson arrived at the end of the pier to find the man floundering in the water behind a boat stating he “couldn’t do it anymore”.  An ambulance arrived almost immediately and was able to coach the man to a piling at the end of the wharf. Engine 305 and Squad 301 arrived with life rings, but chose not to throw them because the man had a secure grip on the piling.

The crew from the Marine Division arrived with their small outboard vessel and Firefighter David Crowley backed the boat into the area.  Lt. John Brooks and Firefighter Charles Loring then extricated the man from the water, pulling him into the fireboat. Support and EMS Companies relocated to the Marine Division float and got the man onto a stretcher so Ambulance 305 could evaluate and transport him to Maine Medical Center.

“This could have had a much different outcome, had it not been for quick decision making of Lt. Brooks and being on the dock at the time”, stated Deputy Fire Chief Thompson. “The skill and expertise of the entire fire boat crew, as well as the versatility of Marine 303 in tight areas.” He went on to say, “it was amazing to watch them determine the correct positioning, maneuver the boat into the tight area, and then swiftly remove the man.”

Emergency calls for the Marine Division may be less frequent, but the threat to life and limb is just as serious as any emergency call the department responds to.