Express Bus to Freeport and Yarmouth in the Works 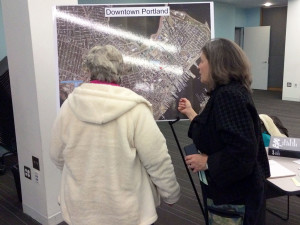 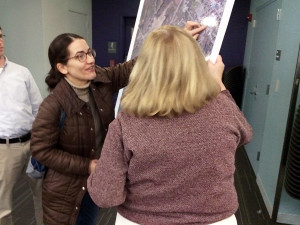 Parkside resident Jenny Anastasoff points out places in Yarmouth where she might take the bus.

Next summer, the Greater Portland Metro plans to launch a new bus route that will run to Yarmouth and Freeport. The Metro is seeking feedback from riders on bus and bus-stop amenities, routes, and scheduling. An online survey will be offered in December.

The express inter-city service would run from Portland to Freeport, up the I-295 and Route 1 corridor, with stops in Yarmouth. and possibly in Falmouth.

It would cost $3.00 one-way — double the current Metro rate. Current monthly passes and ten-ride tickets will not get you a ride on the Freeport-express. Instead, the Metro will offer new products with premium pricing.

The budget is set for ten roundtrips per week, but a final determination on when to run those trips has not been made. The service could run twice a day, Monday through Friday. Or it could run fewer times during the week, and also run on Saturday, or even on Sunday. There is the possibility of coordination with the Downeaster schedule, perhaps offering the ability to take a train one-way, and a bus the other.

Will the bus have comfy seats? Will there be bike racks at bus-stops? These decisions will be made after reviewing feedback from riders, who attended public workshops this November, and from online surveys that will be offered.

The new service is pending funding approval, and will be launched as a pilot project.