Disappearing Packages Over the Holidays – The WEN Police Beat 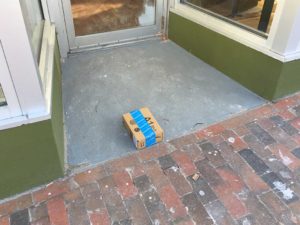 Per community police officer David Argitis, there was an increase in disappearing packages that were left on door steps over the holidays.

To avoid theft of your deliveries, consider leaving a sign with a specific, safer place to leave the package. Also, you could have packages left at your place of business, at the post office or UPS store or have a neighbor take them. Additionally, requiring a signature for delivery could be a helpful precaution.

If you suspect a package has been stolen contact police and the retailer who shipped the package.

At 2:52 a.m. on New Year’s Day one person was arrested in connection to a stabbing at the Munjoy Hill South housing complex. And another person was hospitalized with serious injuries.

A 22-year-old woman stabbed a 23-year-old man during a domestic dispute. Police arrested her on a charge of domestic violence aggravated assault.

As of print,the investigation was ongoing. Police are withholding the names of those involved. Police were not looking for anyone else in connection with the incident.

Portland Police arrested Joshua Nelson, 45 years old of Windham, after robbing the Shaw’s Supermarket at 91 Auburn Street. On December 18th, 2016 at 9:42 p.m., Nelson entered the Northgate store and approached a cashier. He threatened her saying he had a gun but did not display it. He left with the cash drawer that contained an unknown amount of money. Witnesses saw him leaving in a vehicle that was parked in the lot.

At 11:36 p.m. a patrol officer stopped Nelson while driving on Congress Street near Valley Street. Police took Nelson  into custody without incident. No firearm was recovered.

Furthermore, Portland detectives and investigators from South Portland, Scarborough, Westbrook and Falmouth are investigating if Nelson is the person wanted in connection with a series of robberies that occurred in their communities.