Death of the Fourth Estate 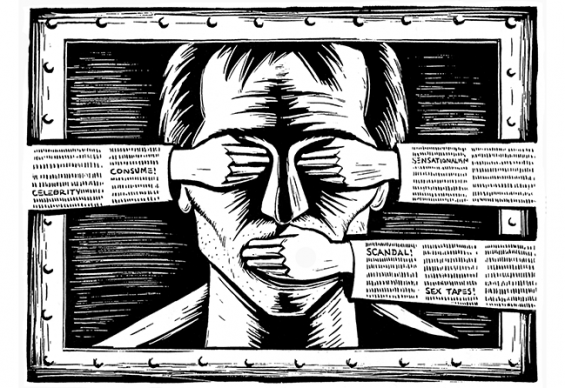 A massive crowd of close to 1,000 people gathered in Monument Square to decry racism and Islamophobia and stand in solidarity with asylum-seekers on Sunday, December 6. The rally, promoted as “Refugees are Welcome Here,” featured eloquent and rousing speeches from members of Portland’s refugee community, as well as their allies in the NAACP, Portland’s Racial Justice Congress, and the fledgling Portland branch of the International Socialist Organization (ISO).

The rally was a powerful rebuke to the racist, xenophobic rhetoric that has infected the media landscape in recent weeks with regard to the massive exodus of refugees fleeing Syria and Iraq. And it was easily one of the largest demonstrations the city has seen in years.

Yet, those who missed the rally would have been excused for not knowing anything about it, given the near total media blackout of the event.

The most glaring oversight was the complete lack of coverage in Maine’s largest circulation newspaper, the Portland Press Herald/Maine Sunday Telegram. The Monday edition of the Press Herald (12/07/2015) did not feature a single mention of the rally. Nor, for that matter, was there any coverage on the paper’s website. By contrast, local television stations WMTW-8 (Portland’s ABC affiliate) and WCSH-6 (NBC) both prominently featured the rally during their Sunday evening news broadcasts.

While the lack of coverage in the “liberal” PPH may not be surprising to many activists, (this is the same paper, keep in mind, that endorsed corporatist Democrat Ethan Strimling in the recent mayoral election) it is nonetheless indicative of a broader trend of the media–newspapers in particular–abdicating their role as a vital public trust.

Much ink has been spilled over the slow death of the newspaper industry (a crisis brought on partly by the advent of the Internet, partly by Americans’ declining reading habits, and partly by generational changes in news-consumption; but mostly due to the simple fact that newspapers are no longer as profitable as they once were, so capitalists are jumping ship). But less attention has been devoted to how much of the industry’s wounds are largely self-inflicted.

The fact is the major print newspapers–the New York Times, the Washington Post, the Lost Angeles Times, the Wall Street Journal, and the god-awful, USA Today–do a pitiful job of empowering readers with news that speaks truth to power and challenges authority. Quite the reverse, the major dailies serve as little more than mouthpieces for the ruling capitalist elite. And this is true regardless of how “objective” or “unbiased” their reporters claim to be.

If we accept Marx and Engels’ assertion that the ruling ideas of any era are the “ideas of the ruling class,” then it follows that the corporate-owned-and-controlled media primarily act as conveyors of those ideas.

“The ruling ideas are nothing more than the ideal expression of the dominant material relationships,” Marx and Engels wrote in 1845, “…hence of the relationships which make one class the ruling one, therefore, the ideas of its dominance.”

Professors Noam Chomsky and Edward Herman put this basic Marxist concept into more contemporary language in their landmark 1988 book, Manufacturing Consent, in which they describe the function of the mainstream media as that of a “propaganda model.”

As such, most of the luminary muckraking reporters throughout history have often faced steep barriers–in the form of editors and corporate advertisers–in their pursuit of stories critical of government officials or corporate malfeasance. Famed investigative journalist, I.F. Stone, for example, was relegated to publishing his own paper, I.F. Stone’s Weekly, from his basement on his own dime during the 1960’s, as no traditional newspaper would hire him.

The rise of so-called “professional journalism” has not only left readers less informed on the pertinent issues of the day (if not, in fact, completely misinformed as in the New York Times‘ phony WMD claims justifying the war in Iraq), but it has also left fewer outlets for journalists to “comfort the afflicted and afflict the comfortable,” in the words of Edward R. Murrow.

Likewise, the rise of the celebrity journalist (Brian Williams, Katie Couric, Anderson Cooper, and Rachel Maddow to name a few), has debased television news into little more than entertainment-style talk shows. These “journalists” routinely sit down with military and political elites who lie right to the cameras and they say nothing to correct these falsehoods.

“The iconic reporter of the past was the definitive outsider,” Glenn Greenwald writes in his tell-all chronicle, No Place to Hide: Edward Snowden, the NSA, and the U.S. Surveillance State. “Many who entered the profession were inclined to oppose rather than serve power, not just by ideology but by personality and disposition…”

That has now changed. With the acquisition of media companies by the world’s largest corporations, most media stars are highly paid employees of conglomerates, no different than other such employees. Instead of selling banking services or financial instruments, they peddle media products to the public on behalf of that corporation. Their career path is determined by the same metrics that amount to success in such an environment: the extent to which they please their corporate bosses and advance the company’s interests.

No journalist makes a six-figure salary. (NBC’s Brian Williams gets close to $10 million a year.) They do not enjoy cozy relationships with presidents and White House officials. True journalists are hated and despised by those in power. Just consider President Barack Obama’s vicious, unprecedented crackdown on journalists and whistleblowers.

While Shorr’s routine skewering of Gov. Paul LePage is welcome and much-deserved, he and fellow liberal columnists like Bill Nemitz and The Forecaster‘s Edgar Allen Beem rarely turn their ire toward the other faction of the Business Party–the Democrats–when they inevitably pursue the same anti-worker policies. As a result these pundits are the liberal version of M.D. Harmon–albeit with fact-checkers.

Struggling, formerly-middle-class Americans, debt-strapped college students and underemployed young people do not see their lives reflected in the pages of the Times or the Press Herald. Those papers seem more interested in reprinting ad nauseam the latest racist rantings of Donald Trump or celebrating the nation’s unassailable small business owners. And college professors wonder why their students have never incorporated newspaper reading into their daily lives?

Don’t get me wrong: I love newspapers. I read about half a dozen of them every day. I, too, lament over the precarious state of journalism, both as a profession and as an essential element for democracy. But in order to understand the failings of the press, we must understand its corporate institutional structure. And the truth is too many newspaper editors, publishers and reporters have abandoned their commitment to truth and social justice in the name of lucrative careers, insider-status, and high-profile book deals.

“Journalism is printing what someone else does not want printed,” George Orwell once wrote. “Everything else is public relations.”