Dear Democrats, The Party’s Over

To say the Democrats blew it in the midterm elections would be an understatement.

The governor’s race should have been theirs to win. Instead, not only was Republican Gov. Paul LePage re-elected on Nov. 4, but he won with an even bigger margin than the razor-thin victory he eked out in 2010.

Sure, U.S. Senate hopeful, Shenna Bellows was always a longshot against “moderate” Republican Susan Collins. And Bruce Poliquin’s win in the 2nd congressional district race is not entirely surprising given the historically right-leaning demographic of that part of the state (what some claim is the “real” Maine).

But the Blaine House was Mike Michaud’s to win.

LePage is by far Maine’s most controversial and unapologetically polarizing governor in modern history. Earlier this year, John Nichols of The Nation magazine pondered whether LePage is “the worst governor of all.” His bullish, petulant temperament and abjectly uncouth behavior have thrust the state into the national spotlight for all the wrong reasons.

And that is to say nothing of his actual policies, which represent the most retrograde, craven kowtowing to elite corporate interests and Randian, “I’ve-got-mine-screw-everyone-else” economics.

Put simply, LePage was so bad the Dems should have been able to run anybody against him and win—and that was essentially their strategy. But they still lost.

Well, for starters there was what political pundits call the “enthusiasm gap.” Quite simply, conservative voters were a lot more excited to go out and vote for their guy than liberals were for theirs.

Frankly, it is not hard to see why.

As a candidate, Michaud was almost as bland and uninspiring as former U.S. Rep. Tom Allen. Like Allen, Michaud’s career in the House of Representatives has been marked by his rank-and-file party loyalty and an utter lack of leadership qualities. And the fact that the man cannot give a coherent speech to save his life certainly did not help him in the debates.

Furthermore, Michaud’s flip-flopping positions on women’s reproductive freedom and gay rights (the latter made all the more hypocritical given Michaud’s own recently disclosed sexual orientation) only further reinforced his image as a stereotypical politician, all too eager to say whatever it takes to get elected.

(Not that Michaud’s shaky stands on either issue prevented him from earning the fawning support of self-described “feminists” and members of Maine’s LGBTQ community—a phenomenon I still find baffling.)

But the Democrats’ problems go beyond just Michaud and this year’s midterms. The fact is the Maine Democratic Party seems to be on a losing streak lately. (See: Libby Mitchell and Cynthia Dill.)

If the Dems are, indeed, in decline—both in Maine and throughout the country–they only have themselves to blame. The party has been steadily shifting rightward for the last 30 years now. As a result, the lines denoting the traditional differentiations between the Democrats from the Republicans have increasingly blurred.

As Professor Noam Chomsky puts it:

“In the U.S. there is basically one party—the business party. It has two factions called Democrats and Republicans, which are somewhat different but carry out variations on the same policies.”

Here in Portland, Democratic legislators have failed to fight against an increasing trend of gentrification in which poor and working-class families are being pushed out of the city to make room for well-off retirees from “away.”

Rather than address pressing issues like affordable housing, rent control or raising the minimum wage (preferably to something higher than $9.50, Mayor Brennan…), prominent Democrats have, instead, invested their energy in failed attempts to auction off public space to out-of-state corporations—Congress Square Park being the most notable example.

At the national-level, President Bill Clinton delivered a crippling blow to labor when he signed the North American Free Trade Agreement (NAFTA) in 1993, which decimated the U.S. manufacturing sector.

Reporter and Truthdig.com columnist, Chris Hedges, in his book, Death of the Liberal Class, offers a devastating excoriation of the Democratic Party, which he charges with abandoning the poor and working-class, and submitting all too willingly to corporate control and permanent war.

“[P]erhaps the worst offender within the liberal class is the Democratic Party,” Hedges writes. “The party consciously sold out the working class for corporate money.” 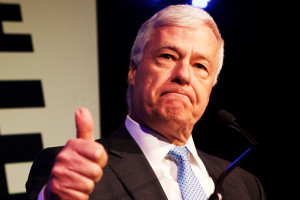 Adam Marletta is a writer, activist, and educator. He blogs regularly at guerrillapress.blogspot.com. You can contact him at adamd.marletta@gmail.com.