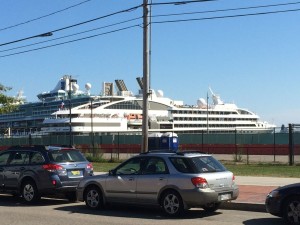 Cruise ships are continuing to buy thousands of pounds of live Maine lobster when they visit Maine, according to Congresswoman Chellie Pingree.  Celebrity Cruises ordered 1,600 pound lobsters for delivery to the 2,000-passenger Celebrity Summit on October 3rd.  That is in addition to 640 lobsters that were purchased in September, and another 1,600 more that will be delivered when that ship returns to Portland later this month.

In 2012, when Pingree learned that cruise ships visiting Maine were not purchasing Maine lobster while in port, she wrote to the CEO’s of several major cruise ship companies urging them to buy local.  Both Celebrity and Norwegian responded and began purchasing locally.

“It’s really just common sense for these cruise ships to stock up on Maine lobster when they are in port, but it wasn’t happening until we brought it to the attention of the people who run these companies,” Pingree said.