Capitalism IS the Crisis 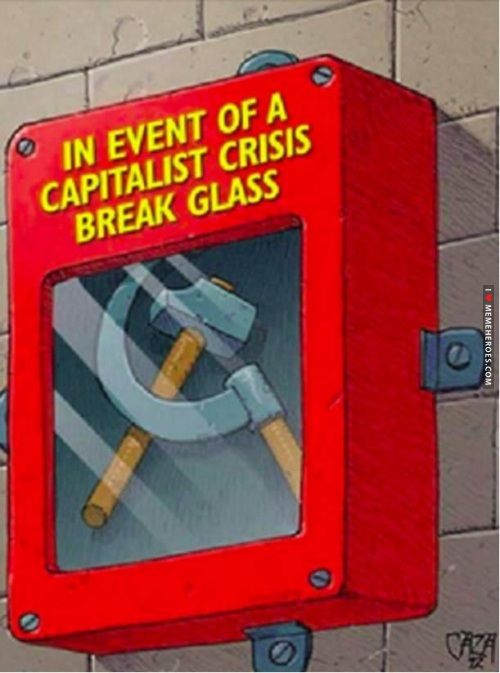 After a summer-long hiatus, West End News readers can relax: I am back with more long-winded political diatribes. I know — just what you have been missing in your life, right?

But seriously, can we talk about how friggin’ bizarre life is under the Trump regime? Every day seems to bring a new Twitter tirade, White House squabble or scandal. Never in my life can I recall reading in the newspaper that the secretary of state openly referred to the sitting president (his boss) as a “f@#*ing moron.”

Many people have remarked that just keeping up with the daily news has become a full-time job — and a depressing one at that. The lead editorial in the October issue of Socialist Worker aptly calls this the era of “political whiplash.” Indeed, from Hurricanes Harvey, Irma, Jose, Maria, and Ophelia, to the raging wildfires in California, “alt-right” demonstrations in Charlottesville, Boston, Berkeley, California, and even here in Maine, and Trump’s ever escalating war against immigrants, women, and “Obamacare,” to his saber-rattling with North Korea and Iran, the left has found itself reeling from one crisis to the next, with little time to catch its breath.

The SW editors call this non-stop “political barrage” a form of “shock-and-awe” politics. And it is a “central part of the right’s strategy: to stun opponent’s into inaction.”

Capitalism is currently in deep crisis. The ruling elites no longer have any credibility. Where once the meritocratic Horatio Alger model of improving one’s living standards through hard work and educational achievement at least held some modicum of truth for large segments of the American working-class, this ruling class principle no longer holds any currency.

For the first time in decades, an entire generation of young adults will be worse off financially than their parents. And this is despite the fact that millennials are the most educated generation in history. (They are also the most debt-burdened from the ever-increasing costs of college education.)

These diminished economic prospects are compounded by a menacing plague of opioid addiction that, in 2016 alone, claimed an estimated 64,000 lives.

As a result, nearly half of millennials believe the so-called “American Dream” is dead. Where once the bourgeois elite could at least hold out the promise that if you work hard you too can join the middle-class — if not, in fact, the rich — now the prospects for working-class people have been reduced to merely hoping a climate-change augmented hurricane or forest fire does not destroy your home and city.

Now if that ain’t a good enough reason to stand in patriotic reverence for our national anthem during commercialized spectator sports, well, you must just hate The Troops, you son of a bitch!

And the crisis of capitalism is not relegated to the United States. Britain’s unexpected vote to leave the European Union (EU) last year (“Brexit”), along with the recent uprising in Catalonia for independence from Spain represent, for the power elite, dramatic threats to the neoliberal status quo. That neoliberal order is crumbling — and the bourgeois ruling class is scared to death.

Their fear is compounded here at home with the expectation-shattering election of Donald Trump. Hillary Clinton was the ruling class’ preferred candidate. Her political experience and proven loyalty to corporate capitalism made her the logical successor to Barack Obama’s Wall Street-friendly policies.

But Trump is a wild card. His erratic and unpredictable behavior makes him difficult for the bourgeoisie — as well as the elements of the so-called “Deep State,” which includes the CIA, the FBI, the NSA and the military-industrial complex — to control. Likewise, much of Trump’s nationalist agenda and his opposition to immigration and free-trade flies in the face of a global capitalist order that, for decades, has relied on cheap, under-paid and easily exploited from abroad.

There is no doubt that Trump should be immediately removed from office — even if this results in the homophobic, Christian evangelical, Mike Pence, taking his place. Trump’s impeachment or defenestration via the 25th Amendment would still represent something of a victory for the left.

But Trump is merely a symptom of the overall disease — the disease of capitalism.

While the pining for Barack Obama among many liberals is somewhat understandable, the left’s goal should not be to return to the status quo. The truth is life in America before Trump took office was hardly a paradise for working-class people. As author, Thomas Frank makes clear in his excellent 2016 book, Listen, Liberal, the corporatist, free-trade policies of both Bill Clinton and Obama directly paved the way for Trump.

Thus, voting for Democrats in 2018 or Kamala Harris, Cory Booker or yes, Hillary Clinton (I would not rule out a third run) in 2020 is not a viable strategy.

Instead, we need to build a formidable, organized left that can agitate for workers’ rights, and mount a serious challenge to the two capitalist parties that have such a stranglehold on our electoral system. This is, admittedly, no easy task. But those who cynically dismiss such a project as “naive” or “politically impossible” would do well to study the history of the Russian Revolution — which celebrates its centennial anniversary this month.

In October of 1917, workers in Russia overthrew the autocratic tsar and established a society run by ordinary, working-class citizens. Russia’s banks were nationalized. Women were granted full legal rights, including the right to free abortion on demand and without apology. And laws banning homosexuality were overturned.

True, this communist society was short-lived. The revolution was soon undermined by Joseph Stalin’s rise to power and the establishment of a repressive, highly bureaucratic form of state-run capitalism which was “communist” in name only. Still, there are important lessons we can take away from this often overlooked history.

“[H]ere it becomes evident that the bourgeoisie is unfit any longer to be the ruling class in society, and to impose its conditions of existence upon society as an overriding law,” Karl Marx and Frederick Engels wrote in The Communist Manifesto in 1848.

… The advance of industry, whose involuntary promoter is the bourgeoisie, replaces the isolation of the laborers, due to competition, by their revolutionary combination, due to association. The development of modern industry, therefore, cuts from under its feet the very foundation on which the bourgeoisie produces and appropriates products. What the bourgeoisie therefore produces, above all, are its own grave-diggers. Its fall and the victory of the proletariat are equally inevitable.