Capitalism is Killing the Planet

A recent anti-tar sands rally in Portland, urging President Barack Obama to veto Congress’ approval of the Keystone XL Pipeline, demonstrated both the dire urgency of climate change, as well as the limitations of conventional liberal environmental activism.

About 50-60 protesters braved bitter cold 12 degree temperatures for the Jan. 13 vigil in Congress Square Park. Attendees included members of 350 Maine, the Portland Unitarian Universalist Church, The Maine Green Party, and the Maine chapter of the Sierra Club. The latter group handed out “Forward on Climate” signs, wherein the “O” in “Forward” is replaced with Obama’s ubiquitous rising sun campaign logo. 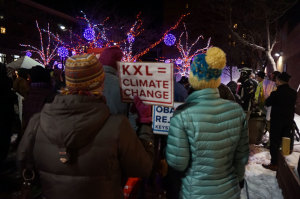 The obligatory speakers all praised the president for his “courage,” and “integrity” in “standing up” to Keystone, despite the fact that as of this writing Obama has not actually vetoed anything. Former Maine Green Party chairman, Asher Platts, was the only speaker to offer any criticism of Obama, pointing out the president’s generally lackluster, “All of the above” environmental record.

Yet, most activists seemed to regard Obama’s pledge to veto the pipeline bill as a fait accompli. As a result, the rally felt more like a celebration than any demonstration of serious activism making demands of elected officials.

While I still believe there is some movement-building/consciousness-raising value in these sorts of admittedly toothless, largely symbolic rallies, if we are to truly tackle the climate crisis we are going to need, to paraphrase Roy Schneider in Jaws, a bigger weapon. That is to say, the environmental movement needs to get real radical, real fast. And part of that radicalization entails taking a much broader perspective on how to effectively confront global warming.

The fact is, the Keystone XL Pipeline–as environmentally destructive as it would be–is merely one small piece of the larger, more encompassing climate crisis. The main engine of that crisis is, quite simply, capitalism itself. Piecemeal legislative reforms like cap-and-trade or nonbinding greenhouse gas lowering treaties like the Kyoto Protocol are not enough. These corporate-approved measures, perhaps by design, do nothing to reduce the amount of CO2 emissions in the atmosphere. In fact, those emissions have increased exponentially in the last two decades.

In other words, rather than fighting these various environmentally destructive projects and practices one at a time, we need to overthrow the very system that makes fossil fuel extraction so enormously profitable for a tiny group of corporations. Capitalism, as a system, is predicated on the concept of unceasing, infinite growth on a planet with finite resources and tangible physical limits. It is this myopic mindset of unlimited growth (what Australian environmental author, Clive Hamilton, calls “growth fetishism”) that causes corporations to view the newly opened land in the rapidly melting Arctic as another business opportunity rather than a frightening sign of environmental destruction.

This sort of thinking is not merely illogical. It borders on the psychotic.

Like the deranged Captain Ahab in Moby Dick, the oil companies are obsessively scouring the Earth for every last drop of oil to forcefully extract and burn into the atmosphere. As Ahab tells the crew of the Pequod in Herman Melville’s classic novel, “All my means are sane, my motive and object are mad.” The doomed whale-hunting captain, like the self-serving CEOs of ExxonMobil and BP “did long disassemble” from mankind. If they must destroy the planet in order to maintain their outrageous profit margins, so be it.

This is the disease of capitalism.

To be certain, what I am calling for is no doubt a formidable task. But at this point, it may well be our only option left.

“[W]e need to be very clear,” writes author and activist, Naomi Klein in her latest book, This Changes Everything: Capitalism vs. the Climate, “because of our decades of collective denial, no gradual, incremental options are now available to us.”

…our economic system and our planetary system are now at war. Or, more accurately, our economy is at war with many forms of life on earth, including human life. What the climate needs to avoid collapse is a contraction in humanity’s use of resources; what our economic model demands to avoid collapse is unfettered expansion. Only one of these sets of rules can be changed, and it’s not the laws of nature.

Yet, while the stakes have truly never been higher, Klein also sees climate change as a grand opportunity to reignite a powerful left, and, in the absence of capitalism, bring about a saner, healthier, more progressive world. And this, rather than appealing to systems of corporate power (i.e. Congress), or praying for a president’s veto, should be our approach to combating climate change.

“Because underneath all of this,” Klein writes,

is the real truth we have been avoiding: climate change isn’t an “issue” to add to the list of things to worry about, next to health care and taxes. It is a civilizational wake-up call. A powerful message–spoken in the language of fires, floods, droughts, and extinctions–telling us that we need an entirely new economic model and a new way of sharing this planet. Telling us that we need to evolve.

At the end of Moby Dick, Ahab is destroyed by his mad quest for vengeance against the White Whale–a figure some literary scholars have viewed as a metaphor for nature. Let this not be our own collective fate.