Our Governor is once again taking a swing at my home city of Portland by advocating for LD 1361. The bill would prohibit minimum wage increases at the municipal level, and I couldn’t be more excited about it. 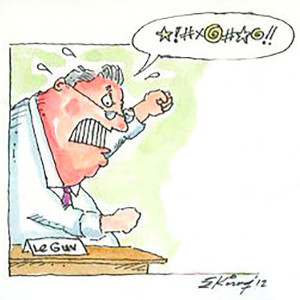 I’m not exited because I support Paul Lepage, but because hating what he stands for is my major source of inspiration lately, as anyone who’s seen my stage act can attest to. Part of it is his plan to tax live entertainment, but it’s mostly how I feel about the place I live.

I’ve been here for the better part of two years now, performed in dozens of local venues, formed meaningful friendships, and I’m starting to feel like I’m really part of an intentional community here.

Part of community, perhaps the most important part of community, is saying “buzz-off” collectively in the same direction. Hating Lepage in Portland is like hating Derek Jeter in Faneuil Hall, it just feels like the right thing to do. The sensation is simple and pure. What to do about it however, is pretty vexing.

People say Lepage is a bully, but he’s far from the cheesy sitcom bully who gets conclusively found out as the bad guy and defeated. He’s much more like my actual playground bullies, who usually came out of conflicts fairly well-liked, who even I didn’t think were all bad, and who would go on to get way more girls than me in high school.

The man has something going for him, jumping from 38% to 48% in his 2014 victory. He may have been aided by Eliot Cutler, the bear-baiting referendum, Eliot Cutler’s supporters, TV ads, and Eliot Cutler’s loved ones, but Lepage deserves some credit.

The reason he won is the same reason people were convinced he’d lose: people really, really don’t like that guy. That kind of notoriety is valuable because it can compel your opponents to make bad decisions.

Nothing demonstrates this better than Joanne Twomey bringing a jar of Vaseline to that town hall meeting in April. It took a bunch of citizen energy opposed to Lepage’s budget proposal and threw it in exactly the wrong direction.

Was the focus on taxing non-profits, on revenue sharing, on the ignorant demonization if immigrant communities? Nope, it was just about a recycled gaff news-story from 2013 that maybe six people still care about. I’ve long since forgotten what the original beef with Troy Jackson was, and at this point I really can’t be bothered to google it. Re-introducing the incident doesn’t remind me to write my State Rep, it doesn’t remind me to get out and vote, it reminds me to giggle to myself and listen to early nineties Ice Cube on repeat.

Being hated also carries with it an enduring celebrity that is invaluable to making one’s voice heard. Barrack Obama’s re-election in 2012 great example of this. Politics is about attention, and State Government is unfathomably boring. I think to myself about how boring the Federal Government is and then try to conceive of something ten times worse. You couldn’t pay me to watch C-Span for more than twenty minutes, and the federal government is in charge of carrying out precision targeted drone strikes.

Maine is governed by a similar apparatus, only instead of being used to command hordes of deadly flying robots, it’s used to set education standards & hire toll booth operators.

Lepage cuts through the chatter by inspiring enough disgust in his opponents to stay relevant to the apathetic and championed by the supportive, and that’s why he’s spending time on the minimum wage.

Raising the minimum wage is popular. It won in Nebraska for goodness sake. Liberals are sure they benefit from the issue, and that’s why Lepage is fighting Portland on it: It’s what a really cocky Republican would do. It attracts a ton of flack, particularly because it’s mostly about Maine’s most liberal city.

Lepage could be faking the bluster, or it could be the real deal. Perhaps he’s just doing it because he wants to. Maybe his success has less to do with Machiavellian calculations and more to do with enjoying a good fight for the sake of a good fight. He absolutely trounced his detractors last year and now he’s rubbing it in right where they live; perhaps for no other reason than to see the look on their faces when he steals their lunch money.

Deep down I think that’s my real problem with Paul Lepage: In his shoes, I’d probably do the same thing.