FairPoint Communications, Inc; System Council T-9 of the International Brotherhood of Electrical Workers (AFL-CIO) Locals 2320, 2326, and 2327; and the Communications Workers of America (AFL-CIO) Local 1400 are pleased to announce that today they have reached tentative agreements on the terms for new collective bargaining agreements.

After Fairpoint declared an impasse in negotiations for a new labor agreement, workers held a demonstration in Longfellow Square on Labor Day to protest what they considered to be union-busting tactics. 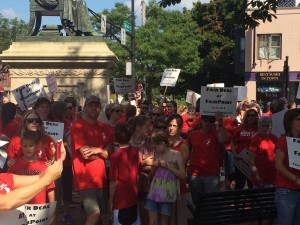 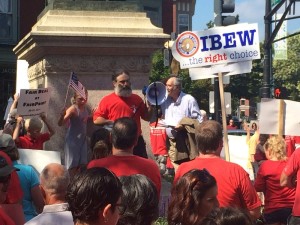 The conflict between union workers and the communications corporation grew, and on October 17th, workers in Maine, New Hampshire and Vermont went on strike.

In late December, the regional National Labor Relations Board (NLRB) dismissed unfair labor practice charges that unions filed against FairPoint. By early January the parties were in federal mediation.

The company and the unions have now come to agreement. All parties acknowledge that the terms of their new collective bargaining agreements will address, in meaningful and constructive ways, the objectives of the parties and that the new labor agreements will provide employees with wages and benefits that are among the best in northern New England. At the same time, the agreements permit the Company to achieve a much more competitive position in the marketplace.