John Eder is a Green Independent, a former Representative for the West End (2002-2006), a politician, a marijuana activist, and now a School Board member.

On November 5th, Eder defeated Gene Landry by 676 votes, three percent of the total. In an interview the day after the election, Eder said that he was ready to move forward on a number of policy ideas, including changing the location of the School Board meetings.

Often the At-large School Board campaign was more about identity than policy. 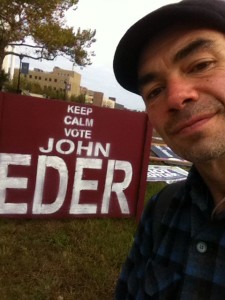 Landry’s signs, on the other hand, stated, “A parent, not a politician.” Landry also used his wife and kids to launch a viral video campaign.

Eder, with no kids to tout, was on the offensive. He criticized the School Board for not being more critical of the superintendent, and for not taking on a more active role in drafting the budget.

“Their fingerprints were no where to be found on the budget,” Eder said of the Board, at the Bayside Neighborhood Association debate.

The campaign started to get ugly in the final days. On November 3rd, just a couple days before the election, Landry posted a character attack of Eder on Facebook.

Landry shared a Bangor Daily News photo of John Eder smoking an oversized joint. The picture was taken last November, on the night of the citywide marijuana legalization victory. Eder was a supporter of the legalization campaign.

Landry posted, in part, “Regardless of your position on marijuana, it is clear we have a drug problem in our schools… I believe public officials have a responsibility to cultivate a healthy, safe, and productive environment in which our children can learn and thrive.”

Eder does not agree that supporting marijuana reform is a problem for a School Board member.

“My act was a political act of defiance. I’m a political person. I’m an adult, making an adult decision,” he said. “Just because I’m against prohibition, doesn’t mean that I’m advocating that kids drink or use adult drugs.”

Eder embraces his political role. “After all,” he said, “if you’re on the School Board, you’re not just a manager, you’re a politician.”

To that end, Eder is ready to move forward on policy ideas, and wants the people of Portland to join him. He said the School Board meetings should be moved out of the current location, that he describes as, “way out on the outskirts of town, at PATHS [Portland Arts and Technology High School], almost to Falmouth.” Rather, Eder wants to hold the meetings downtown at City Hall. He hopes the change in venue might lead to more people attending.

“That is why people voted for me. They wanted a more popular representation on the School Board, that involved everybody. Not representation that makes it either a partisan playground… or a small select group of people looking out for their own children, and not the broader interest of the city as a whole.”