Waiting for the bus is never a highlight of one’s day.

In the winter, waiting for your lift can be outright dangerous. Snow banks and ice limit accessibility. Those waiting for the bus often have to do so in the shoulder of the road. For the handicapped and disabled the problem can be particularly dire.

A program of volunteers is trying to improve conditions at bus stops along the Portland Metro and South Portland Bus Service routes. 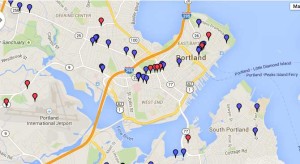 Red marks are stops that have been adopted. Blue marks are priority stops in need of help.

Of more than 600 bus stops in Portland and South Portland fewer than 100 are shoveled out by the municipal public works departments and bus operators. As such, the Adopt-a-Stop program is looking for able-bodied volunteers to adopt a particular stop.

PNA President Emma Holder, when asked if the program has been a success said, “Yes, in as much as I dig out the stops after every $#%£!! blizzard.”

Indeed, do not expect it to be an easy volunteer gig. But, do not think it is a thankless job, either.

Emma continued, “When I’m out there people stop to thank me. If I hadn’t been cleaning out those stops then no one would have been able to use them without standing out in the street, which is incredibly dangerous.”

No stops in the West End have been identified as high-priority, but that does not have to limit a motivated volunteer. If there is a stop in your neighborhood that needs a little extra care, contact the Adopt-a-Stop program through their website.