A letter to Adam Marletta, author of “Capitalism is Killing the Planet”

Adam: I’m checking in regarding your recent article, with it’s references to the “Reject Keystone XL-Now!” Rally in Portland on January 13. 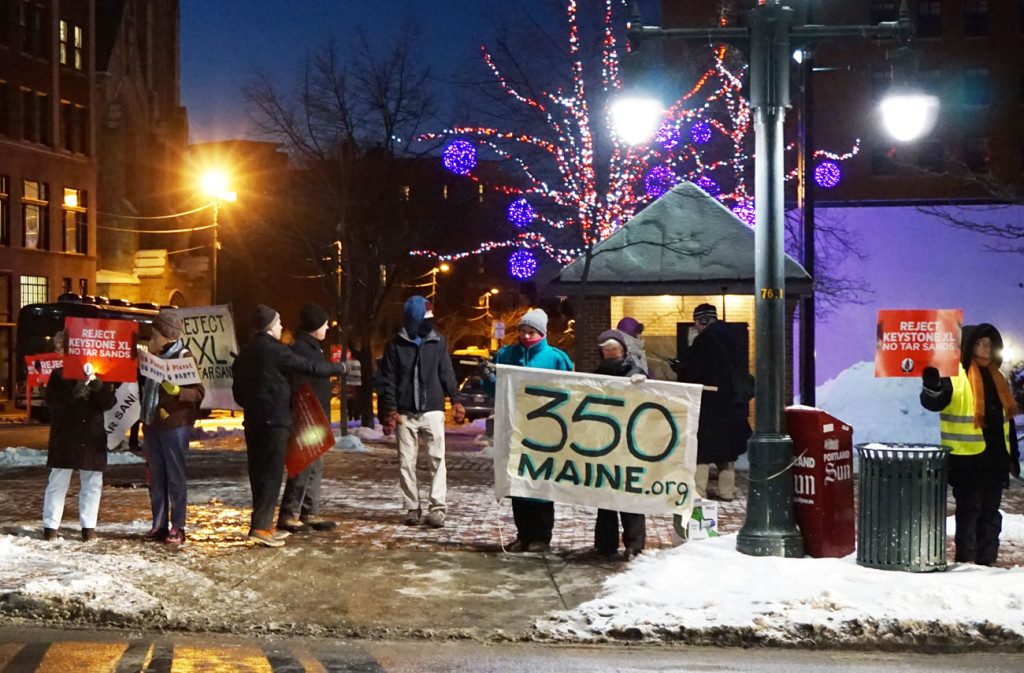 With regard to the title, I – and, I suspect, the majority (if not all) of the people in Congress Square Park the frigid evening of [January] 1​3th ​- agree. However, I have some disagreements with statements you make in your commentary.

350.org has a significant and ongoing history with attending to the fact that capitalism is killing the planet. They do so in engaging, creative and very direct ways… accessing a full spectrum of responses (including notable non-violent civil disobedience).

In 2012, a number of Maine-based 350.org supporters were arrested at the White House – and 1200 of us subsequently surrounded the White House – in opposition to the Keystone XL (KXL) pipeline. In early 2013, with many of us involved in Occupy activities across the state, 350 Maine was formed – viewed by many of us as an Occupy Working Group. In fact, Bill McKibben (co-founder of 350.org) visited Portland and went out of his way to speak in favor of Occupy and its associated anti-capitalism perspective – with an undeniable link to the destruction of the planet. He and many other 350.org ​(including board member Naomi Klein) ​and 350 Maine supporters continue to emphasize this reality. In fact, a key part of our choice to have the event in Congress Square Park (part of the basis for having the every-Sunday, noon-1 “Climate Justice Vigil” there) relates to anti-corporate considerations.

You make a number of comments that I consider faulty; most notably: “The obligatory speakers all praised the president for his ‘courage’ and ‘integrity’ in ‘standing up’ to Keystone…” 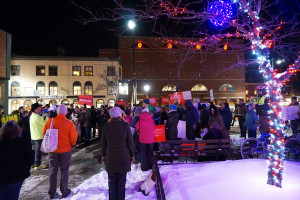 As MC of the event, I accept that I may have been a bit distracted (and key parts of my brain possibly hypothermic!)… but I consider myself to have been pretty attentive to what was said. I did hear the last speaker, Lee Chisholm (a powerful and dedicated facilitator of 350 Maine activities and events and convener of our 350 Greater Portland efforts), speak to Mr. Obama’s “courage” relative to some of his genuinely progressive environmentally-supportive choices. As you recall, there was some push-back from the crowd on the reference to “courage” – and, in response and acknowledgement of the collective groan, Lee’s poetic “mic check” pace faltered a bit… with most of us chuckling at the rare hiccup in an otherwise mutually-supportive event.

Certainly, there may have been other overt references to the president’s “courage” and “integrity”; the reality is that people were free to speak their mind (in fact, we had hoped for an open-mic option… but were thwarted by the cold). But let’s not forget the context of this particular rally: calling on President Obama to veto any KXL-supportive legislation.

I very much appreciate the ability to have an ongoing conversation about “the limitations of conventional liberal environmental activism”; such a conversation is both the wonderful impediment and necessity to our success. However, a key limitation relates to the “circular firing squad”, the ultimate detrimental outcome of a special brand of acti-vism: “complain-avism”.

Just as there needs to be a spectrum of strategic and tactical options for taking on climate change in a necessarily organized fashion, there also needs to be respect for how individuals can and do show up to participate. Having been more of one in the past (probably my primary approach in my youth), the “complain-avist” is an important player: they work hard to point out all that is wrong with the choice of others. In their most fundamental form, they do so without any genuine stepping up to the problem; in that regard, they are nothing but counter-productive. However, when viewed as constructive feedback (rarely their intent), they can be of tremendous value in the essential need for individuals and groups to self-reflect.

Knowing you, in our shared efforts to grow the Green Party, I know that you are anything but a complainavist, Adam. But your article has that all-too-easy tone.

Though I appreciate your statement, “While I still believe there is some movement-building/consciousness-raising value in these sorts of admittedly toothless, largely symbolic rallies…”, I certainly don’t think that the group that gathered that evening – or the dozens of times over the past years (see our abbreviated summary of 350 Maine events from 2014) would view their commitment as anything but notable, intentional and thoughtful. And sensitive to a host of nuances – including the potential value of encouraging Mr. Obama to do the right thing(s).

​Depending on Mr. Obama’s choice, we may have an opportunity to implement a “bigger boat/weapon”, via the CREDO Pledge of Resistance (POR). Such an effort, which would involve almost 100,000 people across the country, would activate yet another component in an arsenal of options in a necessarily strategic response to the KXL… in the context of a larger spectrum of anti-fossil fuel tactics. POR trainings have occurred – and are being renewed – including here in the state of Maine; see information here.

We all know the limits – and the power – of our individual and organized efforts. The facts seem to suggest that part of why Mr. Obama is willing to suggest that he will veto the KXL is BECAUSE of our rallies and other activities, “symbolic” or otherwise. I would caution all of us to not negate the well-intentioned and notable efforts of the many in our individual and united efforts to confront the fact that capitalism IS killing the planet. Of course, as per McKibben, we “can’t take on one pipeline at a time”. And, as per Klein, “due to collective denial, no gradual, incremental options are now available to us”. However, we also have to find ways to maintain and grow beyond the choir…and that won’t be helped by making people wrong or negating the efforts that do exist.

Ultimately, we need to continue to find ways to work together and “Wake Up!”… where we go from there is a choice that is left to each – and all – of us!

Bob Klotz is a healthcare provider, activist and environmentalist. He is a leader of 350 Maine. His response to Adam Marletta’s “Capitalism is Killing the Planet” first appeared on his own blog, knowpower.