There is good news and bad news on the effort to raise the minimum wage in Portland.

The good news is that Portland Mayor Michael Brennan has commissioned a working group to explore the possibility of the city establishing its own minimum wage, separate from the state’s $7.50 per hour. (The federal minimum wage is a quarter less, at $7.25.)

The bad news: His goal of $9.50 is not nearly enough to constitute a substantive improvement in the lives of minimum wage workers.

Indeed, the mayor’s proposal falls short of even President Barack Obama’s plan of $10.10. And Brennan is pretty dead-set against the $15 goal of the grassroots, “Fight for $15” campaign which was instrumental in raising the minimum wage to $15/hr in Seattle earlier this year.

This is also assuming, of course, that the Portland City Council passes Brennan’s minimum wage hike—or that it does so without watering the bill down significantly. Given the Council’s recent, particularly pro-business track-record, I remain skeptical. I guess we will have to wait and see what happens…
But let’s “ac-cent-tchu-ate the positive,” as the Andrews Sisters might say. The good news is that, for the first time in many years, the topic of raising the minimum wage is front-and-center in political discourse, both locally and nationally. It is a conversation that is long overdue.

The fact is the national minimum wage has not kept pace with the rate of inflation since 1968. If it had, it would be around $10.70 today—higher by other estimates. In fact, according to Nobel Prize-winning economist Joseph Stiglitz in his latest book, The Price of Inequality, the “real federal minimum wage” is actually “15 percent lower than it was almost a third of a century ago, in 1980” (Pg. 242; italics in the original).

The United States has the lowest minimum wage among industrialized nations of the world. Australia ($16.88), France ($12.09), and Ontario, Canada ($11) all pay their workers a higher minimum wage—and they provide universal health care, to boot.

If Portland succeeds in establishing its own city-wide minimum wage, it will become the first community in Maine to do so.

The renewed interest in the minimum wage comes at a time when Portland is becoming increasingly unaffordable for working-class residents. Many residents fear a gentrifying trend which increasingly seems to favor wealthy retirees from “away,” while forcing lower-middle class Portlanders out.

Jimmy McMillan was right: “The rent is too damn high!”

The city’s lack of good-paying jobs, the dearth of affordable and subsidized housing, the lingering effects of the Great Recession (wait, I thought that was over…), and employers’ general pickiness over hiring have all compounded the problem.

Thus, the need for a higher minimum wage is all the more imperative.

In the wake of the recession, jobs in retail and the so-called “service economy” are the only industries that are growing. Here in Maine, that means Hannaford, Walmart, and L.L. Bean—the state’s top-three employers—are where most of us are working. All are minimum wage jobs.

Zack Anchors, in a recent edition of his Portland Phoenix column, “One Cent’s Worth” (“Not Getting By in Portland,” 08/08/2014) referenced Barbara Ehrenreich’s seminal 2001 book, Nickel & Dimed: On (Not) Getting By in America. The revelatory expose finds the journalist and social critic going “undercover” in a series of low-skilled, minimum wage jobs—one of which has her cleaning houses in Portland–to get a firsthand account of how difficult it is to make ends-meet.

What is truly striking about Ehrenreich’s pre-Great Recession account is not so much that very little has changed for minimum wage workers in the last 13 years. Rather it is how much worse their plight has become.
“When I watch TV over my dinner at night,” Ehrenreich writes, “I see a world in which everyone makes $15 an hour or more…”

“The sitcoms and dramas are about fashion designers or schoolteachers or lawyers, so it’s easy for a fast-food worker or nurse’s aide to conclude that she is an anomaly—the only one, or almost the only one, who hasn’t been invited to the party. And in a sense she would be right: the poor have disappeared from the culture at large, from its political rhetoric and intellectual endeavors as well as from its daily entertainment.”

Adam Marletta is a writer, freelance reporter, and activist. He serves as Secretary for the Portland Green Independent Committee. And he blogs regularly at guerrillapress.blogspot.com. 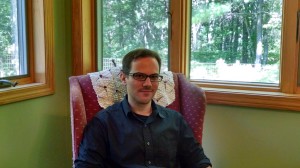