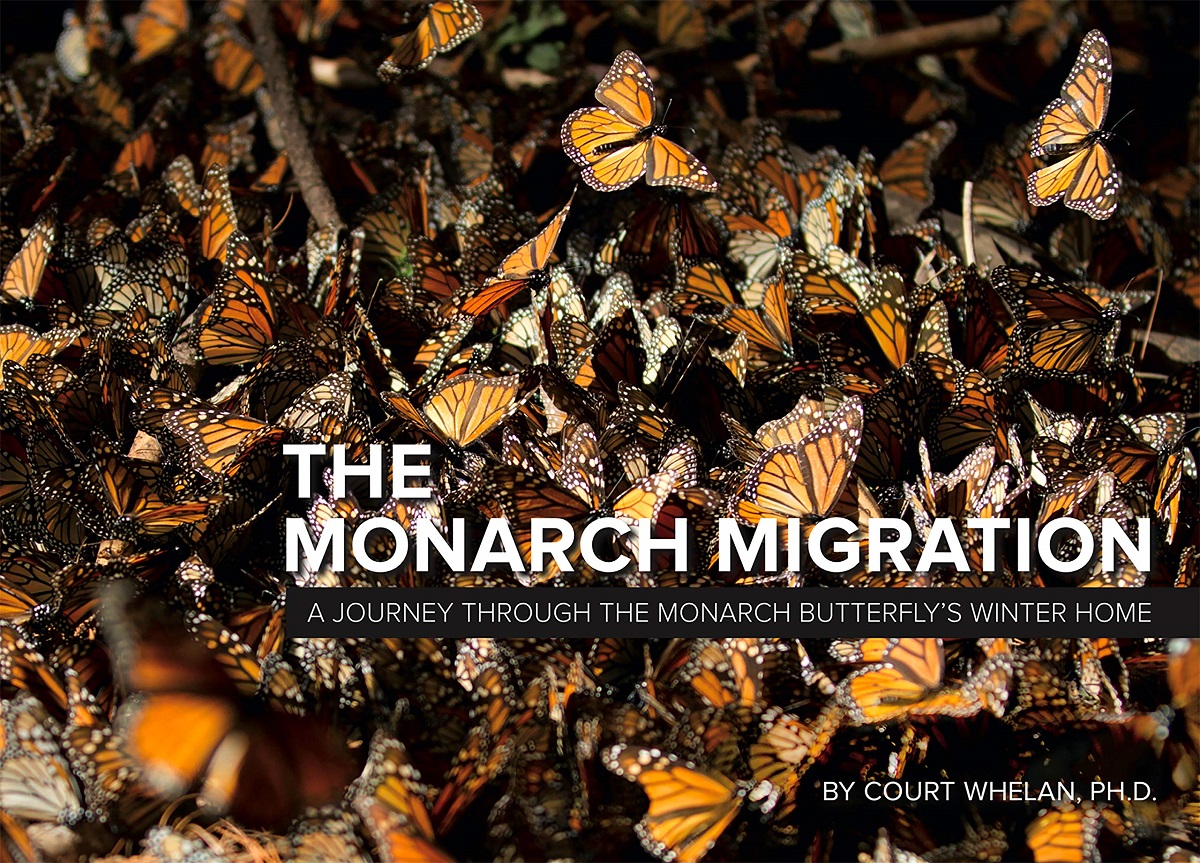 I learned so much recently, listening to Court Whelan, Ph.D., Natural Habitat’s Director of Sustainability and Conservation Travel. Dr. Whelan reported on “the most miraculous and mysterious phenomena in nature.”

Dr. Whelan began by saying that every answer draws at least two more questions… How do they find their way, four generations apart, migrating three thousand miles one way? Why do they go where they go? What is it about that area of the world that draws them from the many corners of the United States and Canada? And, how do they arrive no worse for wear?

MIGRATION OF THE MONARCH BUTTERFLY

These small orange and black migrants have fascinated humans for thousands of years and Dr. Whelan has dedicated his career to studying them. I was entranced during his online presentation offered through Natural Habitat Adventures:  “Understanding the Amazing Monarch Butterfly Migration.” I didn’t know there was so much to it and continued to dig. I have since fluttered down an internet rabbit hole. Here’s a report on what I’ve learned so far…

The monarch butterfly navigation skills are impressive. They have several ways to find their way. First is a time compensated sun compass in which they use their eyes and antennae to navigate based on their relative position to the sun.

But what happens when it is cloudy?

They also have a magnetic sense, a compass in their wings. Where does this magnetic sense come from? They ingest a metal from their superfood milkweed that helps build the magnet.

They also rely on chemical cues; each wing has thousands of small scales that pick up these cues. “Monarch Butterflies cue on ultraviolet rays that are invisible to humans. These rays cut through even heavy clouds,” according to the NPR story, “Study Sheds Light on Butterfly Migration.”

Do all monarchs migrate?

No. From spring to late summer, monarchs go through a number of generations. The first several generations’ lifespans are only a few weeks long. The migrating generation lives four times as long as the prior generations.

How does the migratory generation live four times longer?

Dr. Court explained that the migrating generation has an internal switch. They turn off their reproduction energy and redirect this energy to repair and regenerate cells. It is like a butterfly fountain of youth!

WHAT? Can we do that? Like he said, every answer begs two more questions.

How long does their migration take?

Depending on where they are leaving from, the butterflies begin their journey to Mexico in late August or September and then arrive together around the end of October. “The Mexican holiday Day of the Dead (Dia de los Muertos) also occurs when the monarchs appear. According to traditional belief, the monarchs are the souls of ancestors who are returning to Earth for their annual visit.” (https://journeynorth.org)

Why Mexico and what do they do there?

The monarchs congregate and hibernate in the Michoacán Mountains in central Mexico where the climate is perfect for them and the forest canopy protects them. They are on a butterfly vacation of sorts, escaping the cold winters like many other animals and tourists do.

What about recent reports of dwindling numbers?

There are some threats such as illegal logging, pesticides, and GMOs, but there is reason for optimism. Their numbers are on the rise. Eco-tourism in the Michoacán Mountains provides jobs and locals now see the financial incentive. They are planting trees to replace holes in the canopy. There is a worldwide rise in understanding the added value in protecting the monarchs.

During the question and answer period, a 6th grader asked, “Do monarchs migrate at night?”

The most poetic answer to his question was written in 1911 by Jennie Brooks. She stayed up all night watching clusters of monarchs during their fall migration through Lawrence, Kansas:

“The night was cloudless and absolutely without wind … the butterflies slept on, and on, and on, with wings tightly folded together” until the rays of the sun fell upon them the following morning, and then … “as if touched with a magic wand, the mighty colony … wafted into the air.” (JOURNAL OF THE LEPIDOPTERISTS’ SOCIETY)

What can you do to help the monarchs?

Did you know you can tag and track monarchs?

Peer down a rabbit hole to learn more. These organizations: Monarch Watch, the Southwest Monarch Study, and Monarch Alert all have monarch tagging programs and are always looking for more citizen scientists. Find the program that’s best for you and get involved!

Nancy Dorrans is the founder of  Adventure Marketplace. An independent travel advisor based in the West End, she is currently hibernating in East Tennessee with her father, sister, and family, their beehives, two dogs, and twenty-three chickens.