Faith leaders gather at St. Luke’s to say minimum wage is an issue of justice and morality.

Question 4 on the November ballot has seen a lot of endorsements roll in over the past weeks. Some six hundred small businesses have endorsed the issue. State and national children’s advocacy organizations, advocacy groups for women’s issues and now faith leaders are joining the call to raise Maine’s minimum wage to $12 per hour by 2020. 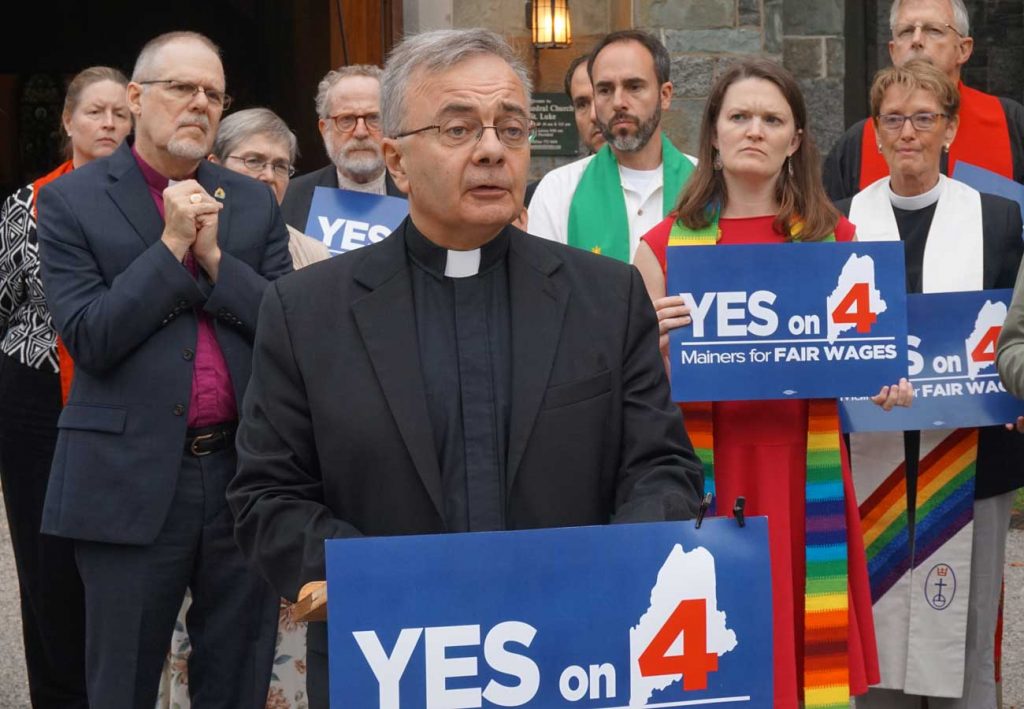 Fr. Michael Seavey speaks of the justice of raising the minimum wage.

Faith leaders representing churches and denominations across the state gathered in September with low wage workers at St. Luke’s on State Street. They called on faith communities to vote Yes on Question 4.

Heather McIntosh works as a server at a higher-end restaurant. She speaks of her struggles as a full-time worker to put food on the table for her children. 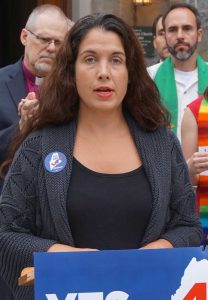 “This is an economic issue and a common-sense issue, but more than that, it’s a moral issue,” says Heather.

Father Michael Seavey of the Roman Coatholic Diocese speaks of justice and faith’s role in helping “one’s humanity to flourish and mature” in the workplace.

Episcopal Bishop Stephen Lane believes the minimum wage is an issue that faith leaders should take to the pews.

“Churches from Dover-Foxcroft to Portland support this measure. We are taking our quest for economic justice to the pews and feel hopeful Maine people will support our position,” says Bishop Lane.

“Minimum wage workers aren’t lazy or stupid. We’re working hard and doing everything we can to get ahead to no avail,” says Tabatha Whalen, a working mother and minimum wage earner.

“Maine workers aren’t asking for much. It’s a basic promise of America that if you work hard, full-time, you should be able to earn enough to scrape by. Right now, with the minimum wage so low, we’re breaking that promise,” says Tabatha.

The referendum to raise the minimum wage from $7.50 to $9 in 2017 and then by a dollar each year to $12 in 2020 is endorsed by the Maine Council of Churches. The Council represents the Episcopal, Lutheran, Methodist, Presbyterian, Quaker, Roman Catholic, Swedenborgian, Unitarian Universalist, and United Church of Christ denominations in Maine.