Local entrepreneur and inventor Alex Jones has had bees on his mind for some time.

“I was really hoping to build something that would identify the real sources of things like colony collapse disorder and general colony health,” said Alex in an interview with WEN. 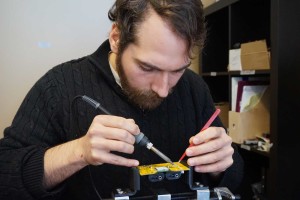 Two years ago, Alex’s family were keeping bees as hobbyists, and asked him for a way to see what the bees were doing when they were not home.

Alex had a background in tech, and was exploring a future in agriculture and organic farming. He was happy to except the challenge.

He began researching, and found that there were a lot of options. like cameras and various kinds of sensors, but they were expensive–thousands of dollars–and designed for research and commercial operations.

He honed in on the idea of tracking hive weight, and set out to design an affordable –less than $200 — scale. He was successful, and now sells the Apiara Backyard Hive Monitor across the country from his business located at Peloton Labs. 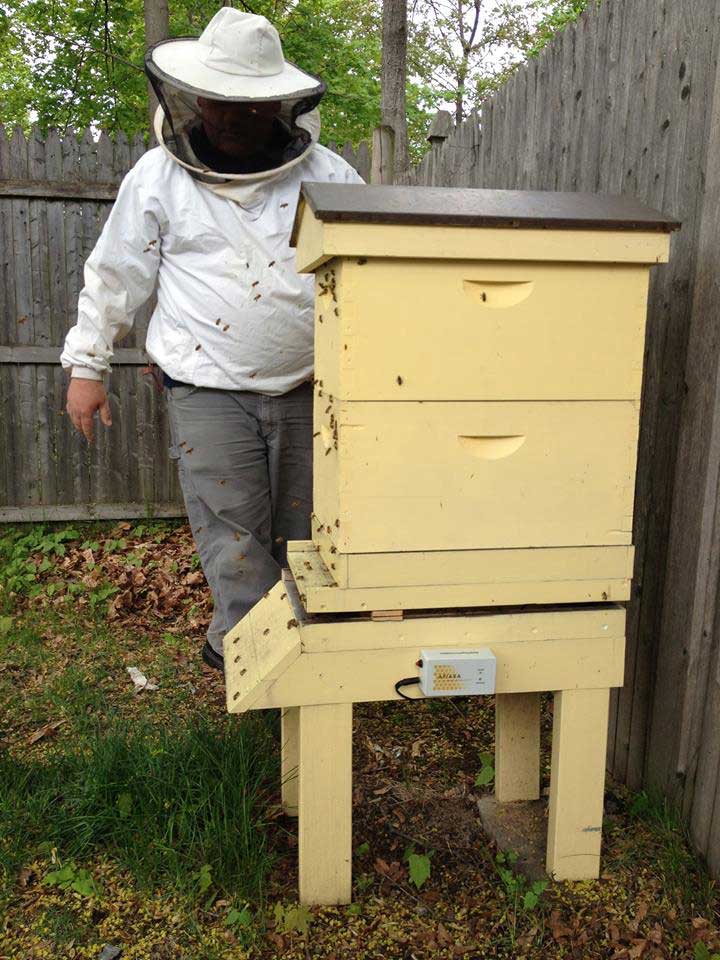 The scale tracks hive weight throughout the day, and sends the timestamped information to the cloud. Busy beekeeping hobbyists, who otherwise may only visit their hive every other Saturday, can use the collected date to witness when bees leave to collect pollen and when they return. The difference in weight between the start and the end of the day reveals how much pollen was collected.

“If you weigh a beehive continuously through the day, you can actually see the weight go down as the bees leave to gather pollen and nectar, and then you can see them come back. So you can literally see inside the hive, without going in there, which is very exciting,” said Alex.

Beekeepers can access their data online, and they can view other beekeepers’ data for comparison.

The Maine Technology Institute helped Alex pilot a program last summer in Southern Maine and Delaware to track differences in the timing of flower blooms based on what bees were doing. 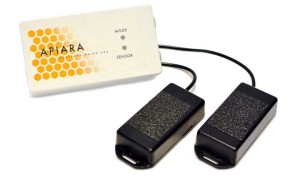 “With this little $150 product, the data we are getting on when flowers are blooming, how intensely they are blooming, and when they will bloom at different latitudes, is as accurate as satellite data coming from NASA–which is just as valuable, but it is not in real time and is hard to access,” said Alex.

During the program, one beekeeper in Delaware used data collected by the Apiara device to discover a queen-less hive. When other hives were leaving to collect pollen, one hive was inactive. By comparing hive weights, the beekeeper knew something was up.

The beekeeper was able to immediately act and replace the queen. The next day the hive was out gathering again. It was a simple solution to a problem that otherwise would not have been noticed until the colony had collapsed.

While this is an example of a specific hive being saved, there is the possibility of using the experience of backyard beekeepers to save all the bees.

Over 90% of people who keep bees are hobbyists. While they keep only about 15% of hives across country, their geographic diversity could be invaluable.

By monitoring a lot of hives across geographic regions, as colonies start to decline in health, researches might be able to triangulate causes.

Maybe regional crops with specific pesticides are to blame for bee health issues in the Midwest. Maybe bees from the Californian almond harvest are traveling to Maine’s blueberry barrens with disease in tow. The more data that is collected, the easier the answers will become.

Alex hopes that as more beekeepers are able to track their hive’s health and activity, solutions to overall bee population health will become evident. It is a bold idea from a sole-proprietor, but with the support of beekeepers, researchers, and others, Apiara may play an important role in saving the bees.