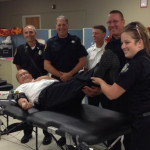 Organizers were unable to accommodate all the potential donors who showed up for the 2nd “Roll Up Your Sleeves and Remember” blood drive at the blood donor center on Forest Avenue on September 11th. The Portland Fire Department, in conjunction with the American Red Cross, collected 108 units of blood, 28 units over the initial goal of 80.

One donor traveled from Bethel, Maine to donate after seeing coverage of the blood drive on TV. Others waited, sometimes for hours, to donate blood. Although donors were encouraged to make appointments, a large number of people showed up, walked in, and waited for their turn to “be someone’s hero”. Still, some people left the facility before they were able to donate due to the huge response.

The 2015 blood drive will be moved to another location to accommodate the anticipated outpouring of support.  The “Roll Up Your Sleeve and Remember” Blood Drive was created to memorialize those who lost their lives or family members in the attacks of 9/11.

This year the department cooked a pancake breakfast from 8:00 AM to 11:00 AM, and  provided donors with a commemorative T-shirt and water bottle as thanks for their donation. Donors were also entered into a raffle allowing six people to eat a meal cooked by the crews at Central Fire Station in Portland. Slugger the Seadog and Crusher, the Portland Red Claws Mascot, also appeared at the event.