Come next year… In Portland, the minimum wage will be $10.10. In Portland, marijuana will be legal, sort of. And in Portland, we will use rank choice voting. Whatever the state ballot and Presidential outcomes, for the West End the story of 2017 is clear: new development.

The face of the West End and surrounding neighborhoods like St. John Valley and Parkside will change rapidly. The city will face important questions. Decisions will be made on building heights versus scenic views, housing units versus parking spots, TIFs versus rising taxes. Next year will decide the future of the city. And the big question will be, who benefits and who is left out?

Not All Is Quiet on the Western Waterfront

The Western Waterfront has a long industrial history. In recent years the Maine Port Authority’s expansion of the International Marine Terminal has spurred a renewal of that industrial past. As such, Portland can expect continued economic growth and development in the area. And the next project is slated to be a cold storage facility developed by Americold, a refrigerated warehouse company located on Read Street in Portland.

The future site of construction occupies a little over six acres between Portland Yatch and the Eimskip trailer yard. This location is ideal for such a facility with inter-modal transportation access to train, ship and truck. The City’s Economic Development Department and the Maine Port Authority see this project as a significant benefit to Maine’s food and beverage industries. It could serve both import and export shippers. As such, they are very excited to push this project forward. And there seems to be little to slow it down, except potentially a zoning change to allow taller building heights.

Consider what happened last year on the Eastern Waterfront, when 58 Fore Street developers had to fight residents all the way to the ballot box to add zoning height.

The Waterfront Port Development Zone (WPDZ) was created in the 1990’s to preserve the working waterfront. It allows intensive industrial use if it is marine oriented. The zone currently allows building heights of forty-five feet. Americold needs seventy feet so they can fit seven rows of pallet storage. That is the maximum number of rows a forklift can reach, and developers say it is necessary to profitably operate the facility. To put it in perspective, seventy feet is about the clearance under Casco Bay Bridge. 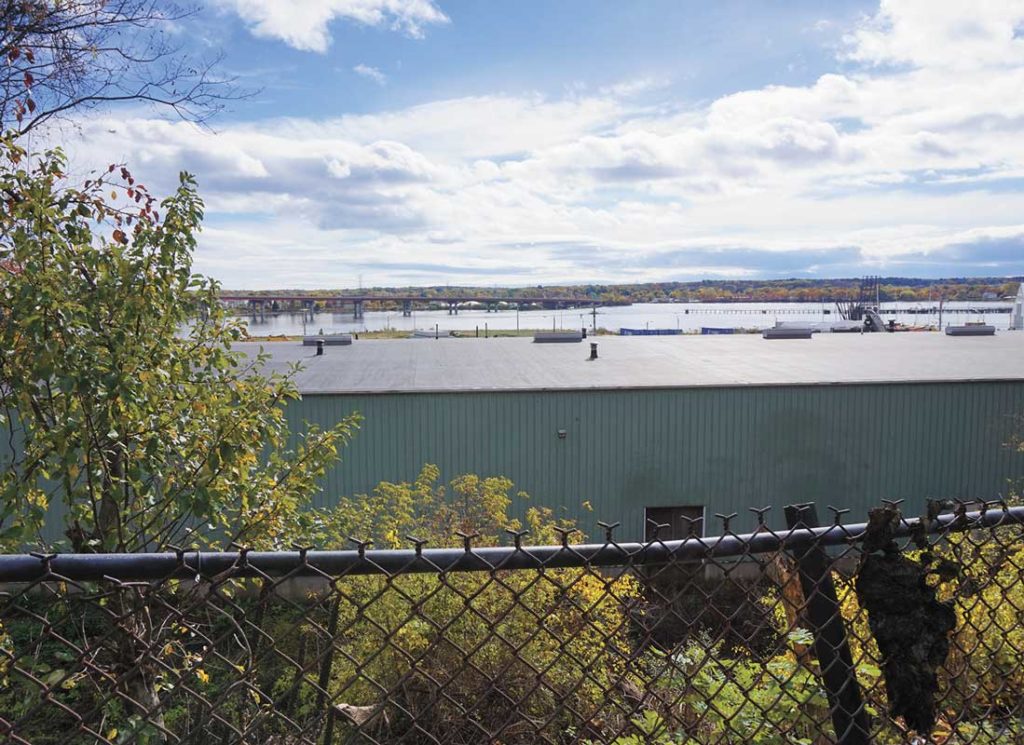 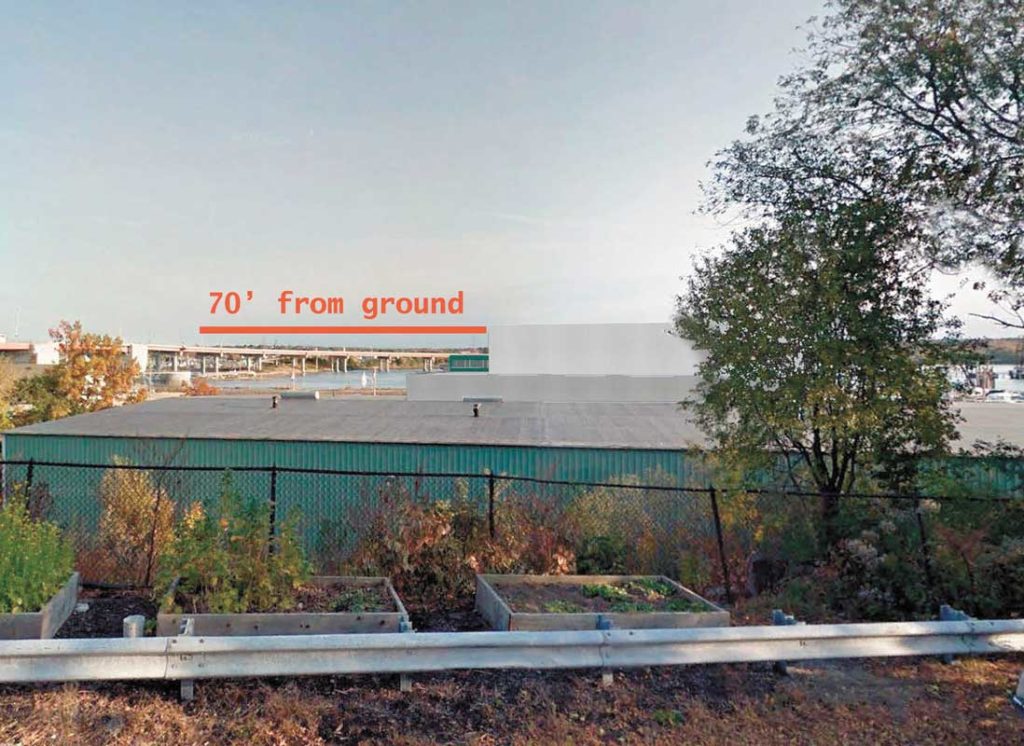 In October, the Economic Development office brought to the Planning Board several options to change the zoning. Their top choice is option one: to replace the maximum height of forty-five feet with seventy feet throughout the WPDZ. Option two is to draft a specific exception for cold storage warehouse use up to seventy feet. Option three would allow seventy feet for cold storage only within Americold’s intended build site.

Some form of zoning change is very likely given the support for the project. Even concerned neighbors who have voiced concerns agree that the economic benefits are worthy. At a public meeting presented by Americold on October 13th, the chief concerns fell under the umbrella of quality of space. The area is the western gateway to the waterfront, and a 120,000-square foot warehouse that is seventy-feet tall would make an ugly “Welcome to Portland” sign.

In respose to neighbors’ concerns, Americold states, “Though it is unlikely that all of the recommendations received from the community can be incorporated into the project, we will continue to be responsive to received questions and requests for information. Further, Americold or our project partners will review received recommendations, and if they are found to be infeasible, will provide an honest rationale to explain the outcome.”

So, the scenic view debate will continue into 2017. Even if zoning is changed this year, other steps of the process will bring further push back from neighbors who want to keep Portland’s skyline as is. What compromises will the developer make? And how hard will residents push? Whatever the outcome, the development of the Western Waterfront will continue, and it will leave some neighbors without their view.

Where to Park on Carleton Street

On the waterfront views are concern number one, but for others it is all about parking.

In October, nonprofit housing developer Avesta started construction on an affordable 37-unit apartment building at 17 Carleton Street. Developers say that this project is intended to create workforce and family housing. It will be home to Portlanders earning forty to sixty percent of the area median income (approximately $20,000 to $40,000 per year). Avesta received an Affordable Housing TIF that will rebate sixty-five percent of future tax income from the property for twenty years.

Through the development process, no one argued against affordable housing. Although, a few argued that affordable housing might not be a good fit in this posh West End neighborhood. Others worried about the look of the building and how it would stand out among the beautiful old facades of Carleton. Still others thought the site plan would lead to a flooding disaster, but City planners and project engineers agreed the plans were adequate.

But through all the public meetings and process these various concerns have been overshadowed time and again by the everyday trial and tribulation of downtown residents with cars.

It is especially relevant that the construction site was a parking lot with fifty-eight leased spots. And Avesta used a car share credit to reduce the City’s required one-for-one unit to parking spot ratio. As such, they will replace only thirty-one spots. 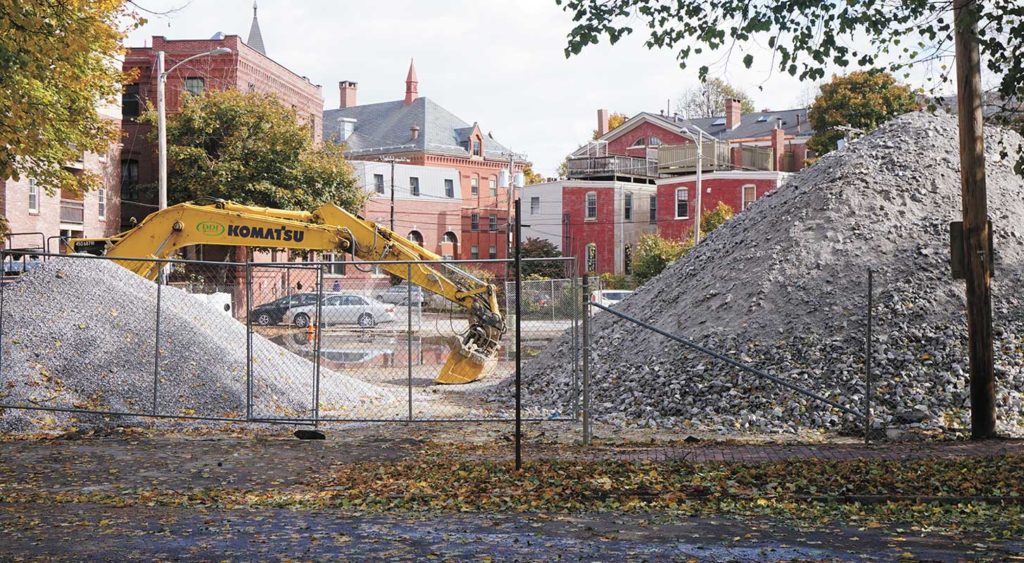 Construction site at 17 Carleton Street as of late October. -Photo by Tony Zeli

Most of the lost spots were leased to tenants of 20 and 30 West Street. Those tenants have had to find parking elsewhere in the neighborhood. Coupled with potential increased demand from new tenants, neighbors have voiced their concern loudly that parking will be exponentially more difficult once the project is complete.

In response, the City has found some new on-street spots for the neighborhood. New parking rules were initiated on the block of 17 Carleton Street to allow parking on both sides of this narrow urban street. Previously parking was allowed on only one side. Unfortunately, the added spots are seasonal from the end of March to December 1st. This will allow space for winter snow to pile up. Yet, the new tenants at 17 Carleton will not be seasonal. Probably, they will need parking year-round.

Ultimately, it is a moot point. This is a private development on private land. Avesta holds all the cards and they are following City ordinances. Local real estate company Benchmark is leading the construction and work is expected to be completed by November 2017.

Seems like the neighborhood can expect with this and every new housing development that there will be greater and greater pressure on all resources – whether parking, transit or other services. As the city rapidly grows, neighbors and officials must work together to figure out creative solutions.

Even the Parks are Developing

You can bet there will be big changes coming to parks in Portland. There is a new parks department. And interest in urban parks has grown dramatically ever since the 2014 “Save Our Parks” ballot measure.

Several parks in the West End are being eyed for redesign. They include Congress Square, Bramhall and Harborview. The stage of redesign and the overall scale of the projects are different, but each is being led by grassroots volunteers.

Everyone is familiar with the controversy over Congress Square Park. The City tried to sell the park, but neighbors took it to the ballot box. They stopped the sale and increased protections to Congress Square and many other parks. The Friends of Congress Square Park formed during the process. They are now taking the lead on a redesign of the entire square, including the park, street intersection and art museum plaza.

In an interview, back in May of this year, Friends board member Bree LaCasse said, “There will be a lot of community meetings where people can way in.”

So, stay tuned to the West End News to learn of opportunities to be a part of redesigning this open urban space.

Meanwhile, an informal group is considering possibilities at Bramhall Square, on the corner of Deering and Congress.

Liz Trice is the head of programming at Peloton Labs, a co-working space on Bramhall Square where the West End News office is located. She is leading the charge to redesign Bramhall Square into a more usable and attractive park.

As such, Liz organized a design charrette in September 2015. Since then volunteers have already made some small improvements, such as temporary landscaping and seating during the warmer months. Meanwhile, they convinced the City to install electricity. This winter be on the lookout for holiday lights. 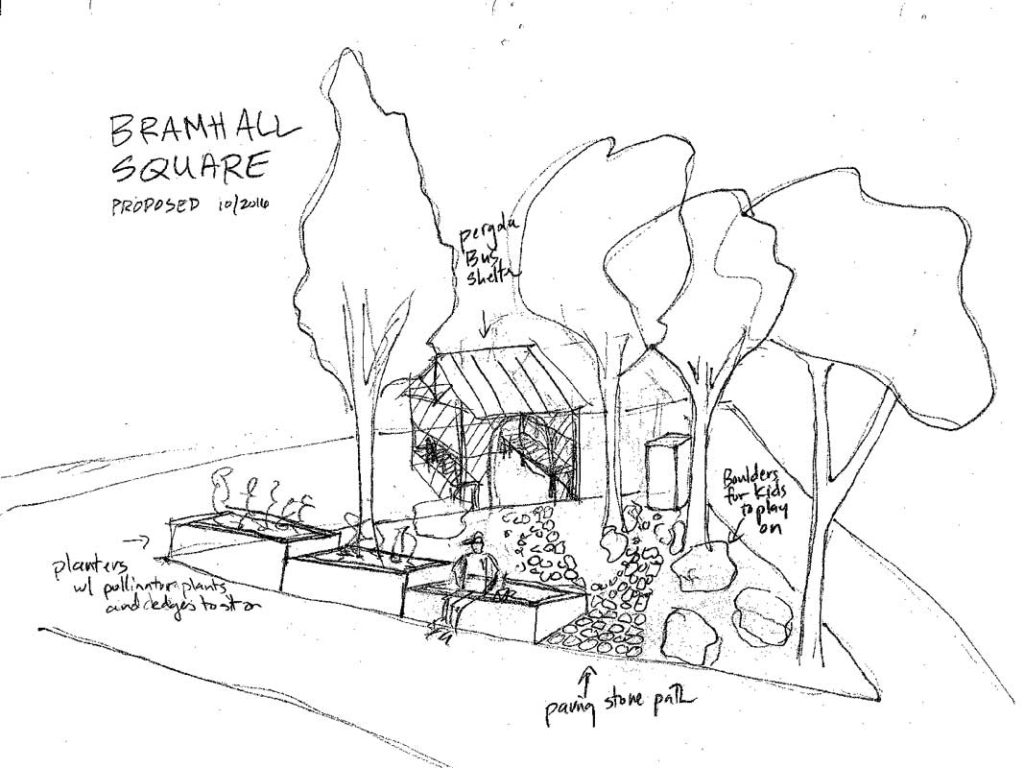 Probably, no major changes will occur in 2017, but this park will come a long way and interest in improving the square will likely grow.

Finally, other neighbors are taking a new look at Harborview Park, the oft forgotten park overlooking Casco Bay Bridge at the end of Brackett Street. Residents are considering creating more garden space, possibly planting fruit trees and perhaps even building a dog run. Indeed, this is a fledgling effort, but given the renewed interest in downtown parks, it is likely to pick up steam.

And do not forget about the Maine Medical Center expansion. Few details are out and the process is just beginning, but it will have a huge impact on the surrounding neighborhoods. The hospital will build a new front façade on Congress Street. It will build a massive new parking garage. Parking garages are always a point of contention. Also, building heights on a steep grade will end up in front of the Planning Board again.

Furthermore, Maine Medical Center has had rocky relations with neighbors. Yet, neighborhood tensions with a huge corporate neighbor is not surprising. In the past, hospital employees caused havoc with parking. Also, there is growing concern over where hospital employees choose to take their smoke breaks. Given the touchy relationship, this development process will be one to watch in 2017.