Councilors Will Push for $10.10 Min Wage

In an email sent to media, Councilor Jon Hinck stated that he, Councilor Justin Costa and Mayor Brennan will introduce an amendment to the minimum wage proposal that came out of the Council’s Finance Committee at the public hearing on Monday, July 6th.

Mayor Brennan started the process of raising the minimum wage with a task force that began meeting over a year ago. The task force recommended a $10.10 minimum wage by this July, and a raise to $10.68 by 2017.

Councilors Hinck and Costa, with Mayor Brennan, will seek to amend the Finance Committee’s proposal to get it closer to the original one made by the Mayor after his task force. 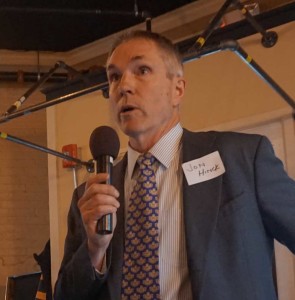 Jon Hinck speaks at a fundraiser for Spencer Thibodeau, running for District 2 City Council, in May.

“This amendment represents our best effort to incorporate what we have learned through this process, and to achieve the best outcome for the City and its residents,” said Councilor Hinck in an email. “Portland’s minimum wage workers deserve a raise and it’s our hope that with Council approval this will happen in the new year.”

Meanwhile, the Portland Green Independent Committee has collected enough signatures to put a $15 minimum wage initiative on the ballot this November. And the Maine People’s Alliance and Maine AFL-CIO are collecting signatures for a statewide $12 minimum wage.