Congress Square: Time to Speed Up the Process

The concrete plaza in the heart of Portland’s Art District has been scheduled for a facelift for almost a decade.

The dust has settled after the June vote on the parks initiative. Many saw the initiative as little more than a scheme to stop development of a large portion of Congress Square Park by the Westin Portland Harborview Hotel (or as most West Enders still refer to it, the Eastland). Others portrayed the referendum as a necessary step to prevent Councilors and out-of-state investors from developing our precious public spaces. All sides agreed that the park sorely needs renovation. The question now is what will it look like?

On August 20 the group charged with answering that question, the Congress Square Redesign Study Group, met to discuss possible scenarios for a grand spanking new Congress Square. And good news! They have narrowed it down to two options. It only took at least seven years of meetings, public comments and countless suggestions from every corner of the city to get this far.

The City Council started the redesign process for Congress Square in 2007. This is when Councilors Kevin Donoghue (East End) and Dave Marshall (West End) sought and gained the approval of City Council to form the Congress Square Redesign Study Group. This group first met in 2008.

Donoghue and Marshall originally proposed to charge the study group with redesigning the entire Congress Square intersection, one of the busiest intersections in the state, but the City Council reduced the scope to only the park.

In 2008 the study group got as far as approving a RFP (Request For Proposals) process for the park’s redesign. So why the delay? Why were Councilors and members of the public condemning the park as a failed space as recently as this past summer, when a redesign process had begun many years beforehand?

Enter a mysterious easement. In 2009 city staff halted the Congress Square RFP process. They claimed that the hotel that abuts the park had an easement that prevents a redesign of the park. Every thing was put on hold for our poor, neglected park. But why? What did the easement have to do with any of this? We may never know. The easement was never produced by city staff or the owners of the hotel. No one in recent history has actually seen this easement.

Regardless, the city staff delayed the process and created an opportunity for Rockbridge, the investment firm out of Ohio that owns the Westin Hotel, to get involved. Then things got messy, but let’s skip that part.

Earlier this month at the last Council meeting the entire Congress Square intersection was added to the study group’s purview. They will now consider the intersection of High and Congress Streets, Congress Square Plaza, the public spaces in front of the Portland Museum of Art and the H. H. Hay building, and surrounding sidewalks and traffic islands. It looks like Councilors Donoghue and Marshall will get what they wanted when they first envisioned the study group.

Of course, we are still far from an improved Congress Square. The study group is likely to be meeting for several more months, with a deadline for recommendations to the City Council in November. Their next step is to choose a scenario for the park so that a new RFP process can begin.

This scenario will likely be one of two options: a redesign of the park without the event center Rockbridge wants, or a design that includes an event center with a public access green space on its roof.

The roof-top park is not a new idea. Councilors Donoghue and Marshall brought the idea before the study group years ago, but the developers said it would be far too costly. No kidding.

The developers have changed their tune, slightly. They are open to the idea as long as the city pays for any extra costs to them to reinforce the event center’s roof and maintain public egresses. In other words, it will never happen.

Not only are cost estimates for building a roof-top park as high as $4.5 million, but there would be huge costs and challenges to maintaining such a space. Who pays for and maintains the park, the building, the egresses to get on and off the green roof?

In our opinion the roof-top park is a cool idea, but the study group should not waste anymore of their time considering it. Dismiss it as too costly immediately and move on to more realistic recommendations. It is long past time to move forward and build our new park. 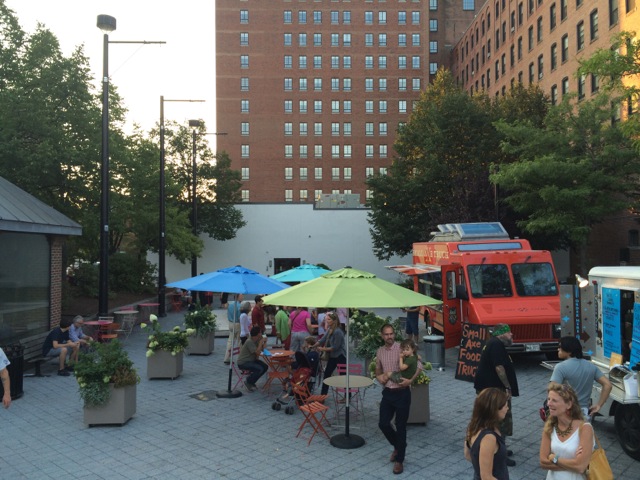