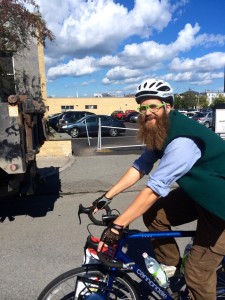 WEN rode along with Platts from Port City Bike to City Hall, before he left on his 100 mile trek.

The three day, one hundred mile bicycle ride to the Common Ground Fair had cheduled stops in Brunswick, Topsham, Gardiner, Hallowell and Augusta, arriving in Unity on Friday, September 19th.

The candidates were forgoing fossil fuel for three days to travel a “century”, 100 miles by bicycle, and invited others who want solutions to climate change to join them.

“A gorgeous bike ride, a fun thing to do, and Common Ground is awesome,” said Platts.