While I have never been particularly clairvoyant when it comes to making political predictions, I nonetheless feel highly confident in proclaiming the following:

Bernie Sanders will not become the next president of the United States. 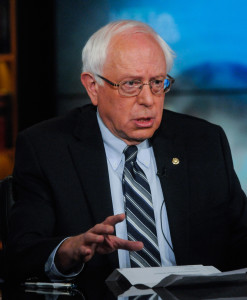 In fact, the independent Vermont senator, who is running for president in the Democratic Party, will not even win the nomination. I forecast a Bernie Sanders bait and switch next year.

This forecast is not the result of some jaded, pessimistic political view, as Sanders’ supporters are likely to fire back. Rather, it is based on the past history of figures like Sanders–progressive champions like Dennis Kucinich, Jesse Jackson, and to a lesser extent, fellow Vermonter, Howard Dean–who have also attempted to “push” the Democratic Party “to the left,” rather than challenging it from the outside as an independent or third-party candidate.

The fact is, we have seen this show before. And we know how it ultimately ends.

Come “Super Tuesday,” all of the major Democratic Party donors, corporate funders, and carefully vetted, “super delegates” will line up behind Hillary Clinton, likely deeming her the “least offensive” to their capitalist interests. Sanders will abandon his presidential bid, and rally his dejected supporters to “come together” for Clinton, lest the scary Republican (Jeb Bush, I predict) wins the election.

Sanders will, in effect, deliver his supporters–many of whom will enroll in the Democratic Party simply so they can vote for him in their state’s primary–to Clinton.

“The sheepdog,” Dixon writes, “is a card the Democratic party plays every presidential primary season when there’s no White House Democrat running for re-election.”

The sheepdog is a presidential candidate running ostensibly to the left of the establishment Democrat to whom the billionaires will award the nomination. Sheepdogs are herders, and the sheepdog candidate is charged with herding activists and voters back into the Democratic fold who might otherwise drift leftward, and outside of the Democratic Party, either staying home or trying to build something outside the two party box.

“The Democratic establishment can breathe a collective sigh of relief,” Smith writes in a May 5 piece, (“The Problem With Bernie Sanders”). “It doesn’t, in fact, fear liberal Democrats like Kucinich or Sanders, but third-party challenges like [Ralph] Nader’s that have the prospect of breaking their stranglehold on votes from workers and the oppressed…”

Indeed, Smith goes on to suggest the establishment Clinton needs the decidedly more left of center Sanders in the race in order to shore up support for her own less than inspiring candidacy. “Clinton,” he writes, “regards Sanders as an asset to her campaign.”

He will bring enthusiasm and attention to Democratic primaries that promised to be lackluster at best. He will also help her frame the election on populist terms that have widespread support. That benefits the Democrats and undermines the Republicans, who have little to say about inequality, except that they like it.

Yet, Sanders loyalists–many of whom have been through this same bait-and-switch before–still refuse to accept the truth about their buddy “Bernie.”

“You don’t know that he will sell us out for Clinton!” they protest. “Bernie would never do that! He has more integrity than that!”

STEPHANOPOULOS: So if you lose this nomination fight, will you support the Democratic nominee?

SANDERS: Yes. I have in the past.

STEPHANOPOULOS: Not going to run as an independent?

SANDERS: No, absolutely not. I’ve been very clear about that.

That seems pretty straight-forward, to me. And given that Sen. Sanders votes with the Democrats about 98 percent of the time, we have no reason to doubt his allegiance to the party.

None of this is to suggest there is anything truly “bad” or “objectionable” about Bernie Sanders — at least as far as his domestic platform is concerned. (On matters of foreign policy Sanders, sadly, does little to differentiate himself from every other warmonger in the Democratic Party.)

Obviously, it is easy to see why college students and young voters, who do not yet have the depth of political understanding and experience as veteran activists like Dixon and Smith, are galvanized by Sanders’ populist rhetoric.

Indeed, the fact that people throughout the country are cramming into town hall style meetings to hear a self-described “socialist” speak a year-and-a-half before a presidential election is, in of itself, pretty damn impressive. It is, I believe, another sign of the growing popularity of socialist ideas, particularly among young Americans.

It is the manner Sanders is going about his campaign — and, specifically, his decision not to challenge the two-party duopoly by running as an independent — that is problematic.

The fact is, Sanders’ campaign is not a movement builder. Nor is Sanders taking the “practical” or “realistic” approach, as his supporters are quick to argue. Quite simply, the idea of launching a “political revolution,” as Sanders has said is his goal, by running in what Lance Selfa calls the “second most enthusiastic capitalist party” in America, is about as “realistic” as the fossil fuel industry taking the lead in tackling climate change.

At the heart of Sanders’ campaign is the long-promoted idea among liberals that the left can “take over” the Democratic Party, and thus make it more of a progressive, worker-oriented party. This is a strategy that has failed every single time. This is the Bernie Sanders bait and switch that I worry about.

As Selfa observes in his recently updated book, The Democrats: A Critical History:

It’s said that one definition of insanity is doing the same thing over and over and expecting a different result each time. If that’s true, the partisans of such “realistic” strategies of fusing with the Democrats or of “taking over” the Democratic Party–both of which have failed generations of progressives–are really the ones who are out of touch with reality.

My advice? Don’t fall for the Bernie Sanders bait and switch next year. Radicals looking to join a real political revolution — not just a presidential campaign, but a people-powered movement — should look to the Green Party’s (presumptive nominee) Dr. Jill Stein. Sure, Stein is about as likely to become president as Sanders. But, come the general election and, more importantly, in the weeks and months afterwards, she and her supporters will still be locked in the long but necessary struggle for real systemic change – -long after the Sanders campaign has packed up and gone home.